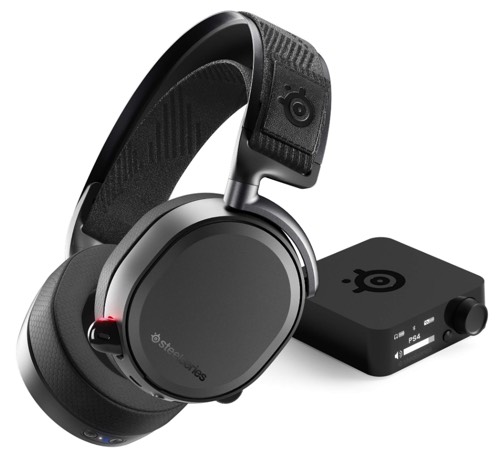 Somehow I stumbled into an obsession with headsets. Specifically gaming headsets. I’ve owned probably a dozen. The intent of this post is not to examine my problem, but I’m acknowledging it. The upshot of my semi-exhaustive survey of headsets is that I’ve learned a thing or two about what makes for a good headset. Now I invite you–willingly or not–into my world.

My latest acquisition is the Arctis Pro Wireless premium gaming headset by Steelseries. It makes sound and has a (retractable!) boom microphone. It connects to my PS4. But the luxuries are where it starts to distinguish itself from the pack…

This headset comes with a puck-sized base station containing a transmitter to maintain a very clear wireless signal with good range. I’m used to having my headsets drop out within 10 feet, but the Arctis Pro appears to go well beyond that.

The base station also serves to charge a swappable battery pack. (It is supposed to come with two interchangeable battery packs; mine came with three. YMMV.) If you’re a gamer you know the pain of a headset dying during an intense competitive session; you scramble to attach a power cord or backup headset, probably dying a few times in the process. With the Arctis Pro you can swap in a fully charged battery pack and then charge the spare from the base station at your leisure. Wonderful.

Moreover, anyone who has used the ubiquitous micro USB standard knows how fussy and unreliable the jacks can be (often shorting after a few years–or months–of use). Swappable battery packs avoid the micro USB pit entirely. The battery slot is tastefully concealed under a magnetic faceplate on the headset. This is a very good feature.

The base station also has an OLED screen. More on that later.

One feature is worth highlighting: an aluminum-or-steel (unsure which) metal headband. Unlike almost all headsets (even premium ones!) the band on this headset is metal, rather than plastic. It is adequately flexible, though, contrary to my pretentious online persona I have a relatively small head and do not push the limits of its flexibility. An elastic ski goggle band keeps the whole thing magically suspended above my head, so it’s not metal-on-skull. It’s perfectly comfortable.

The earcups are a foam over-the-ear design, with a fabric cover. Again, perfectly comfortable–like most headsets. The pins attaching the earcups to the band are concealed underneath plastic and thus I can’t determine from what material they’re constructed. Hopefully steel or aluminum. On the other hand, I’ve heard countless stories of plastic headbands breaking. I’ve never heard of the earcup pin breaking, though it seems another pressure point. In this case, Steelseries seems to have at least ensured the most likely point of failure is durable.

As mentioned the mic is attached to a retractable gooseneck. This is less ideal than a swivel boom (because swiveling is a simpler motion than pulling/pushing), but still allows the headset to operate with a smaller profile. For space-conscious users like me, I like the headset to be as compact as possible when not in use. 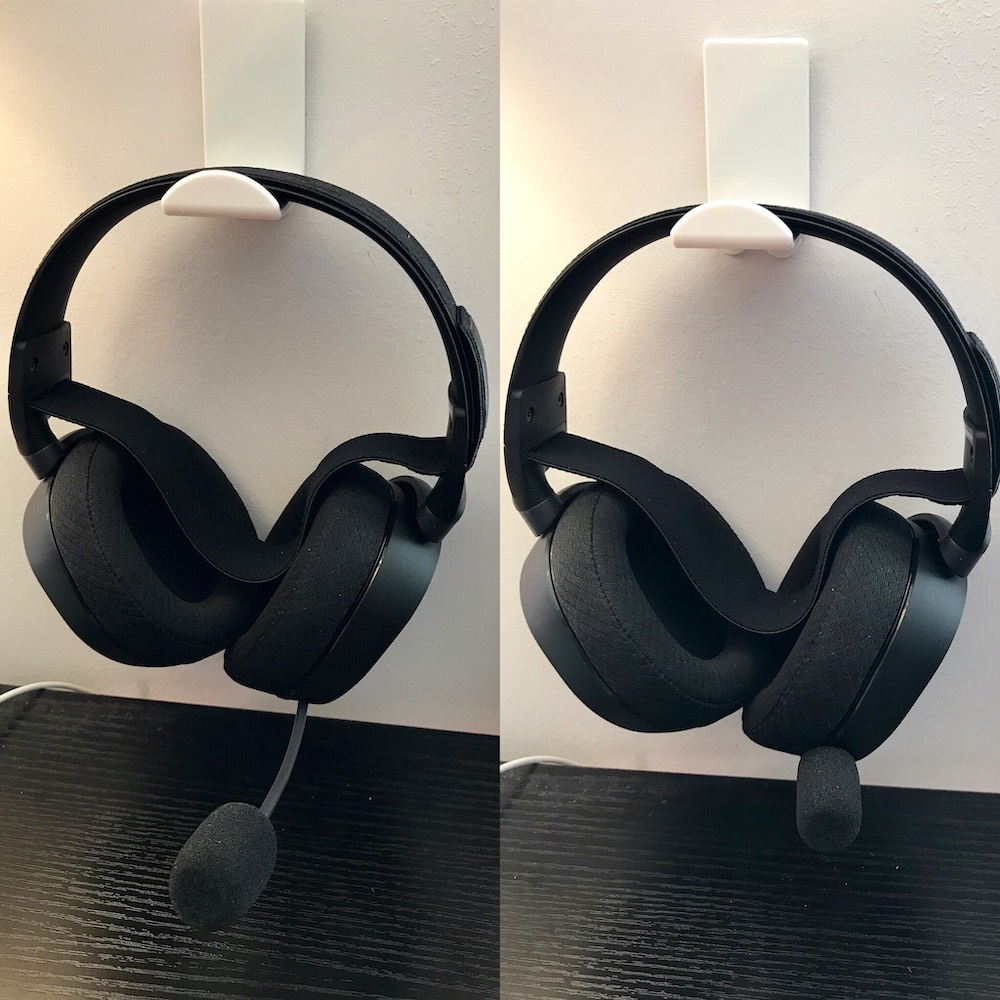 There is a rather large (around 1" tall) physical mute button, a large clickable multipurpose scroll wheel, a tiny convex power button, and a tiny concave bluetooth button. The mute/scroll wheel are good, and the power button is hard to find and too small. But best of all my headrest doesn’t accidentally push buttons, unlike some headsets I’ve owned. And a physical mute means that the mute state is tied to the position of the button–you can leave yourself muted, power cycle the headset, and still be muted. Having a persistent mute state is a weirdly useful ability in the headset world.[1] 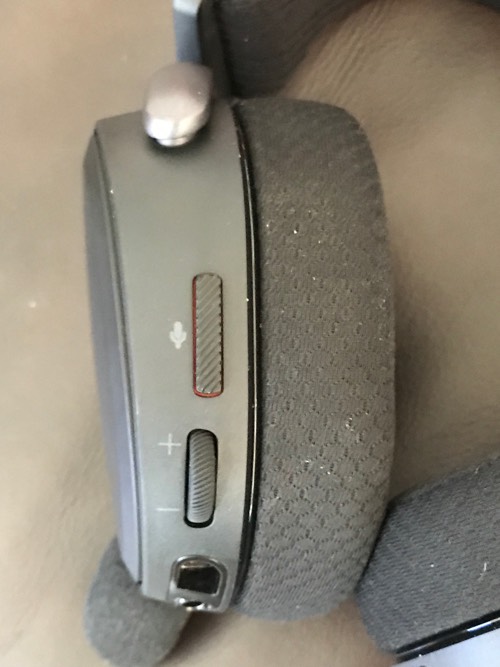 As far as the basestation, it is a light rectangle of plastic with a clickable multipurpose wheel and a vivid OLED display. I sit about five feet away and can read the display clearly.

Having an OLED display for menus and settings is very good. Most headsets have cryptic beeps or a disruptive robotic voice to read settings (such as equalization or input source), but being able to see this information is infinitely preferable due to the speed at which visual information can be parsed. It’s clever that Steelseries came up with a way to display visual information on a headset. It might not work for all users if they can’t store the base station in sight, but for me it’s just perfect.

It also means the headset can have a no-muss-no-fuss minimal physical interface. After struggling to find the power button, one need only interact with a fat mute button and a fat scroll wheel. The scroll wheel defaults to volume (as it should), but with a click you can cycle through other settings, such as equalization and chat/game balance volume.

Some other headsets offer independent chat and game volume controls, which is certainly nice, but in practice once you have the right balance one does not need to dial in this setting that frequently. And if you need to mute your friends during a cutscene, well, the control is only a click away.

There are more parameters that can be accessed on the base station itself and not included in the quick menu available from the headset’s scroll wheel. These are things like configuring EQ presets and sidetone levels.

All in all it is a very good user experience with a nice balance of depth and accessibility.

Ironically, I’m not much of an audiophile. The DTS Headphone X 2.0 surround is very convincing and the best surround I’ve had on a headset–I’ve found myself idly convinced there are noises coming from within my home while playing, before remembering it’s in the game. The audio mix seems good–clear highs and mids and deep lows. I would call it the best-sounding gaming headset I’ve had.

Caveat: I don’t know what I’m talking about and you shouldn’t listen to me. There is a good chance I’m imagining this. All I can say for sure is that the sound pleases me, while admitting I’m not qualified to offer an endorsement on an objective level.

For me, the Arctis Pro Wireless’s killer feature, its must-buy determiner, is one that wouldn’t register for many gamers and would be instantly disabled by many others. I’m talking about mic monitoring (or “sidetone” as it’s referred to in the industry).

As if I were in a recording session, I require really good monitoring while I’m chatting in games (that is, if my headset has passive noise cancellation). Something about not being able to hear myself talk is very distracting and can result in shouting.

Gaming headsets are often very bad with their sidetone support. Either it’s absent or inadequate. The Arctis Pro Wireless offers configurable sidetone, with volume ranging from 0 to 9.

I set mine at 7 and it’s still the loudest sidetone I’ve ever heard. Steelseries really hit it out of the park with their configurable sidetone, making this the headset to get for insane gamers like me who are in love with the sound of their own voice.

Bluetooth (and other amenities)

Oh, yeah. It has bluetooth, so I could use it as a phone/laptop headset, if I wanted. It has a PC utility that works on Windows/Mac. It has jacks for wired connections. I haven’t played with these features and this review is not exhaustive.

I didn’t include a discussion of the price because it’s a big shrug. Premium gaming headsets run about $300 MSRP, and I’m used to it by now. However, given this headset is constructed from better materials, includes multiple battery packs, and a standalone base station with an OLED screen, I’d say this is a better value than the competition.

This is the best headset I’ve ever owned, and I’ve owned a lot. It might not be the right headset for you, but it’s the perfect one for me.